People with Narcissistic Personality Disorder are very controlling with the people around them. They can be jealous and possessive. They will often use coercive techniques in their control of others, this is defined as an offence in British law introduced in 2015 to mean:

“An act or a pattern of acts of assault, threats, humiliation and intimidation or other abuse that is used to harm, punish, or frighten a victim.”

“Controlling behaviour is a range of acts designed to make a person subordinate and/or dependent by isolating them from sources of support, exploiting their resources and capacities for personal gain, depriving them of the means needed for independence, resistance and escape and regulating their everyday behaviour.”

Below is Biderman’s Chart of Coercion. It was written by Dr. Alfred D. Biderman M.A., who was a social scientist. He studied brainwashing techniques of communist governments on American prisoners of war and in 1956 he published a report on this which can be found here. 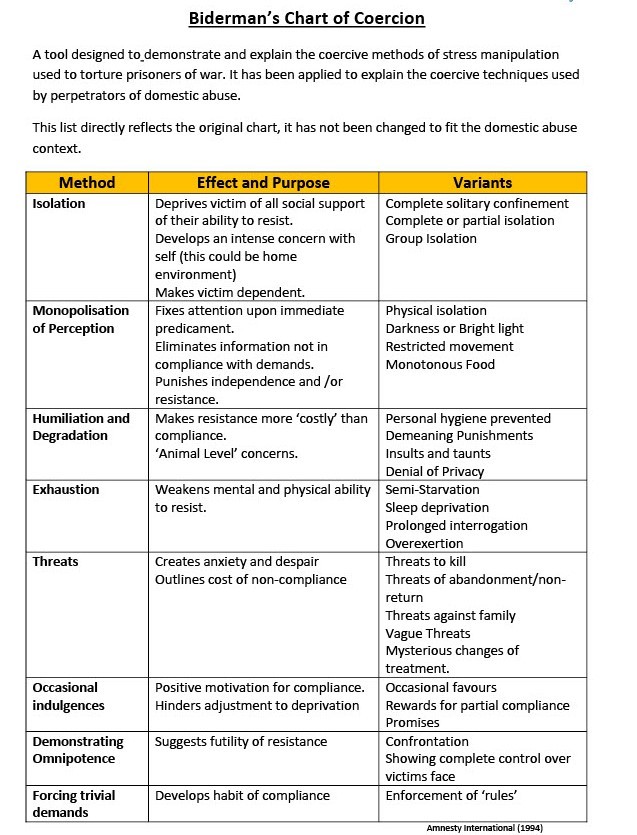 Coercive control is abusive as it is manipulative, threatening, seeks to dominate others and subjugate them to one’s own will. It results in its victims ‘walking on eggshells’ around the perpetrator. The narcissist wishes to control others as part of their disorder. It is not love, although possessiveness and jealousy can be mistaken for love by those from dysfunctional backgrounds. Drivers for their behaviours can be insecurity and fear of the loss of particular people who are ‘supply‘ for them. Other people exist in a narcissist’s life to reinforce their image of themselves and if mirroring from the environment is inadequate the false grandiose self will feel frustrated and then the underlying anger and depression will start to emerge. By controlling and micromanaging those around them, the narcissist hopes to control their inner world of terrifying emotions.

Narcissists are not always consciously aware of the reasons for some of their behaviours as the triggers and reactions are kept out of their conscious awareness but they are usually aware of which behaviours are acceptable or not as they will behave in certain ways in front of different people.

Romantic relationships between a narcissist and another will start in the idealisation phase and can often seem like the perfect relationship. This then deteriorates over time as the coercive techniques seep in as a means of control. Disapproval of independence and underlying jealousy can mean that their partner becomes isolated from friends and family. The need to control can mean that you must buy into their way of thinking as it is ‘their way or the highway’ which means their way of perceiving the world and what they want dominates their partner’s way. Insecurities can mean that their subconscious hatred of themselves is projected onto their partner and this can result in insults and degradation. There is generally an underlying threat of abandonment of which their partner will be implicitly aware which creates an atmosphere of anxiety. A person with NPD is often chaotic and badly organised in their thought processes. They will use the primitive defence of denial (the refusal to accept reality or fact, acting as if a painful event, thought or feeling did not exist which is characteristic of early childhood development) consciously or subconsciously. This is a characteristic of the ‘gaslighting’ technique when blatant lies are used. This can be destabilising for their partner who often does not understand what is happening and may doubt their own perceptions as it is likely they have come from a family with narcissism and will be familiar with this scenario. 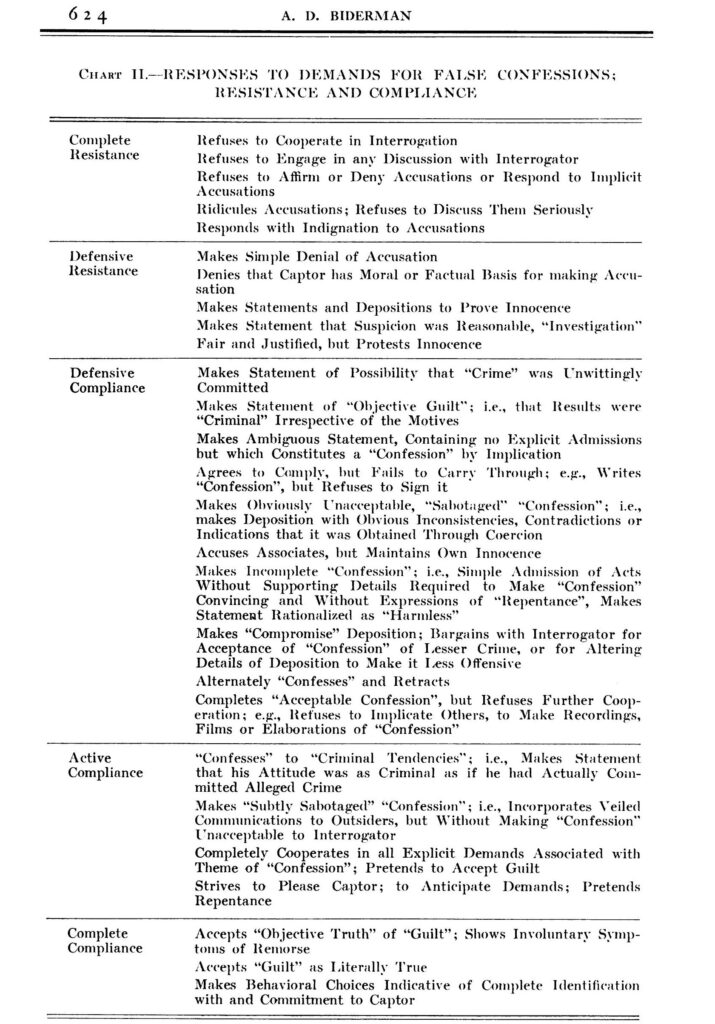 Biderman notes that although there were some cases of those who were unable to withstand the coercion, in almost all cases, resistance was the dominant ingredient. He ends his report with this: “The mystery associated with the things I have discussed stems not from their rationality but from their irrationality. Unlike the cynical Nazis who merely perpetrated the Big Lie, the Chinese Communist personnel whom our prisoners encountered in Korea were required to live the Big Lie”.

Such is life with a narcissist. The people around them are required to live the Big Lie.