The Myth of Narcissus 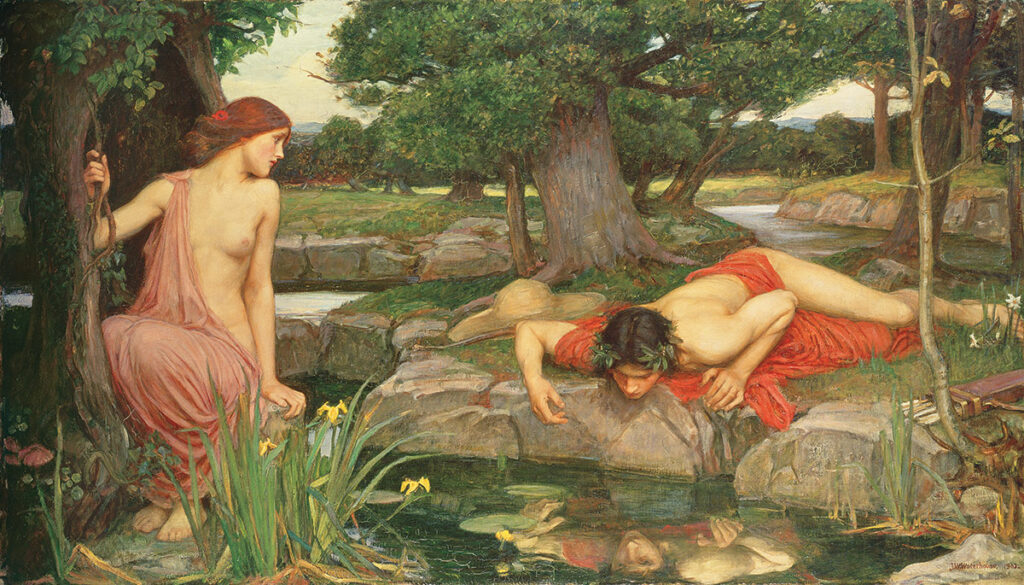 Narcissus is a character from Greek/Roman Mythology. The classic version of the story of Echo and Narcissus is found in Book III of the Metamorphoses, a Latin narrative poem written by Ovid, a Roman poet in around 8AD.

Narcissus’ father was Cephisus the river god and his mother was the beautiful nymph Liriope.

“Liriope, whom once the river-god Cephisus clasped in his winding streams, and took by force under the waves gave birth at full term to a child whom, even then, one could fall in love with, called Narcissus. Being consulted as to whether the child would live a long life, the seer with prophetic vision replied ‘If he does not discover himself’.

Narcissus was the product of rape as we see that his mother was taken, once, ‘by force’ by his father. Rape is an act of power, dominance and entitlement over another. There is no empathy for the victim. His mother would have had PTSD from this act and this would have made attaching to her child a complicated process. Narcissus is a child of trauma.

Liriope goes to a seer to know the future and he says ‘Narcissus will live to be old if he does not discover himself.’ This is a prediction that if he becomes self-obsessed it will kill him. Narcissus does discover himself.

“One year the son of Cephisus had reached sixteen and many youths and many young girls desired him. But there was such intense pride in that delicate form that none of the youths or young girls affected him. One day the nymph Echo saw him, driving frightened deer into his nets, she of the echoing voice, who cannot be silent when others have spoken, nor learn how to speak first herself.“

By age 16, Narcissus is very handsome, has an intense pride in himself and is desired by men and women but has no interest in any of them. He is emotionally closed off.

For work, he is a hunter of deer and one day when he is hunting he is spotted by Echo. Echo has had her voice limited by Juno, the Queen of the gods, as a punishment for distracting her in conversation when her husband Jupiter was with other nymphs. Echo was cursed with only being able to repeat the last few words of what someone has said and could not speak any words of her own. This is symbolic of a person who has suppressed their own identity and lives to please others, she reflects others back to themselves but her personality cannot be seen.

A person with NPD will look for those in the environment who reflect back their idealised image of themselves and will in turn idealise that person in the beginning of the relationship. For this myth to be fully representative of narcissism, Narcissus would have a relationship with Echo until it deteriorated into the devaluing stage at which point he would have searched for other sources of narcissistic ‘supply’.

“Now when she saw Narcissus wandering through the remote fields, she was inflamed, following him secretly, and the more she followed the closer she burned with fire….Her nature denies it, and will not let her begin, but she is ready for what it will allow her to do, to wait for sounds, to which she can return words.

By chance, the boy, separated from his faithful band of followers, had called out ‘Is anyone here?’ and ‘Here’ Echo replied. He is astonished, and glances everywhere, and shouts in a loud voice ‘Come to me!’ She calls as he calls. He looks back, and no one appearing behind, asks ‘Why do you run from me?’ and receives the same words as he speaks. He stands still, and deceived by the likeness to an answering voice, says ‘Here, let us meet together’. And, never answering to another sound more gladly, Echo replies ‘Together’, and to assist her words comes out of the woods to put her arms around his neck, in longing. He runs from her, and running cries ‘Away with these encircling hands! May I die before what’s mine is yours.’ She answers, only ‘What’s mine is yours!’

Scorned, she wanders in the woods and hides her face in shame among the leaves, and from that time on lives in lonely caves. But still her love endures, increased by the sadness of rejection. Her sleepless thoughts waste her sad form, and her body’s strength vanishes into the air. Only her bones and the sound of her voice are left. Her voice remains, her bones, they say, were changed to shapes of stone. She hides in the woods, no longer to be seen on the hills, but to be heard by everyone. It is sound that lives in her.

Echo is consumed with desire and wants to seduce Narcissus. He is separated from his followers and when calling out for them, Echo answers. A misunderstanding leads to Echo rushing out to embrace Narcissus, who is repulsed and states ‘May I die before what’s mine is yours.’ She repeats ‘What’s mine is yours.’

In this exchange, Narcissus has stated he would rather die then give anything of himself to Echo and Echo has given herself to him. She has been scorned and then disappears in shame. She is still in love with Narcissus and feels the pain of his rejection and she wastes away until only her bones and voice are left. She can no longer be seen but can only be heard.

Narcissus lies down at a pool to drink. “While he desires to quench his thirst, a different thirst is created. While he drinks he is seized by the vision of his reflected form. He is astonished by himself.

Flat on the ground, he contemplates two stars, his eyes, and his hair, his youthful cheeks and ivory neck, the beauty of his face, the rose-flush mingled in the whiteness of snow, admiring everything for which he is himself admired. Unknowingly he desires himself. How often he gave his lips in vain to the deceptive pool, how often, trying to embrace the neck he could see, he plunged his arms into the water, but could not catch himself within them! What he has seen he does not understand, but what he sees he is on fire for, and the same error both seduces and deceives his eyes.

Fool, why try to catch a fleeting image, in vain? What you search for is nowhere: turning away, what you love is lost! What you perceive is the shadow of reflected form: nothing of you is in it. It comes and stays with you, and leaves with you, if you can leave!”

A prayer from a person Narcissus had mocked goes up to the goddess Nemesis/Rhamnusia, the goddess of retribution who punishes mortal pride and arrogance on behalf of the gods. The prayer states, ‘So may he himself love, and so may he fail to command what he loves!’

“No care for Ceres’s gift of bread, or for rest, can draw him away. Stretched on the shadowed grass he gazes at that false image with un-sated eyes, and loses himself in his own vision.

I am he. I sense it and I am not deceived by my own image. I am burning with love for myself.

Nor is dying painful to me, laying down my sadness in death. I wish that him I love might live on, but now we shall die united, two in one spirit.’

Here, Narcissus speaks of  ‘two in one spirit’, this can be symbolic of the false and the real self. There is the knowledge that both parts of him will die but he has made peace with that.

“He spoke, and returned madly to the same reflection, and his tears stirred the water, and the image became obscured in the rippling pool. As he saw it vanishing, he cried out ‘Where do you fly to? Stay, cruel one, do not abandon one who loves you! I am allowed to gaze at what I cannot touch, and so provide food for my miserable passion!’  He no longer retains his colour, no longer has life and strength, and that form so pleasing to look at, nor has he that body which Echo loved. His last words as he looked into the familiar pool were ‘Alas, in vain, beloved boy!’ and the place echoed every word, and when he said ‘Goodbye!’ Echo also said ‘Goodbye!’

He laid down his weary head in the green grass, death closing those eyes that had marvelled at their lord’s beauty.

And now they were preparing the funeral pyre, the quivering torches and the bier, but there was no body. They came upon a flower, instead of his body, with white petals surrounding a yellow heart.”

He says goodbye to himself and Echo is still echoing him and repeats ‘goodbye’. Neither could find their true selves and they have both been destroyed.

The love of the false self kills him. He loses his strength and beauty and wastes away.

Narcissus too is rejected by his false self – the image in the water – his true self is the self which he and others rejected in childhood. It rejected him and all others.

His narcissism dies and he becomes a flower.

The flower is perhaps a symbol of something beautiful being able to grow after the death of the toxic false self. 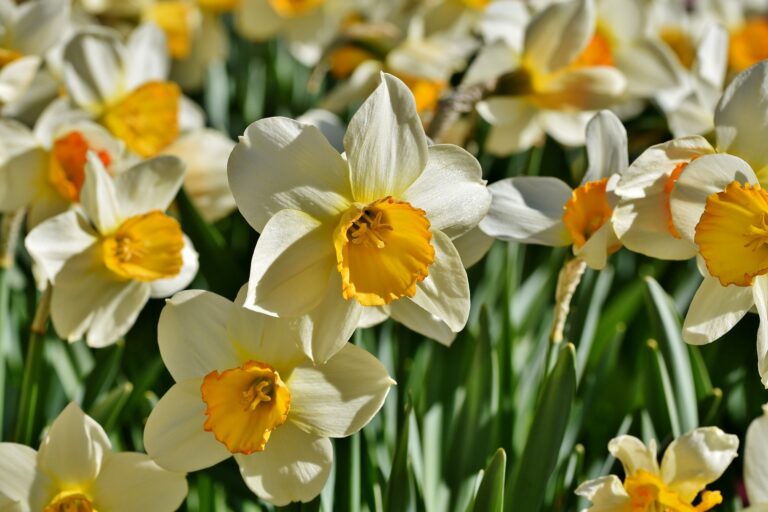