Narcissism originally begins as a response in childhood to developmental issues. Both nature and nurture are influential in the early years in setting up the personality.

Elements of narcissism are needed in the development of a healthy personality. Narcissism forms the basis of self-esteem which enables people to feel deserving of and to achieve their ambitions in terms of work, relationships and other personal goals.

When the narcissistic aspect of the personality is out of balance it can lead to either low or high levels of narcissism. At one end of the spectrum, we have pathological narcissism which becomes concerned with the needs of the self above all others. Their behaviour is self-centred, and the needs of others are disregarded. They become entitled and grandiose and will attempt to control those around them as they coerce the environment, through anger, to resonate with their needs. They want admiration and recognition of their uniqueness and specialness.

At the opposing end of the spectrum, we have low levels of narcissism which result in the individual putting the needs of others above their own and seeing little value in themselves. They may become chronic people pleasers and are out of touch with their own wants and needs. They may struggle to stand up for themselves and may accept being treated badly in relationships as they do not feel they deserve to be loved and accepted for themselves. 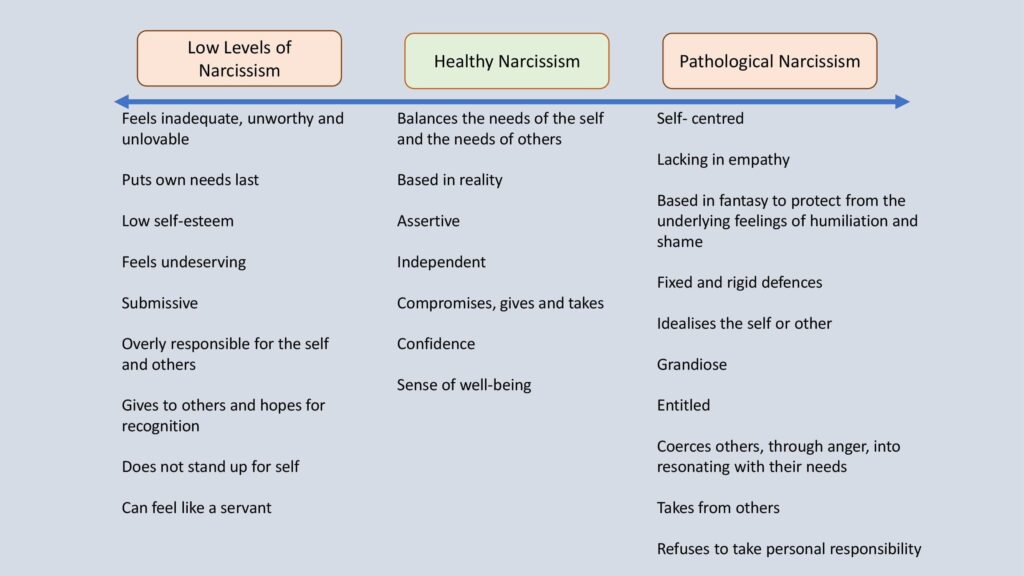