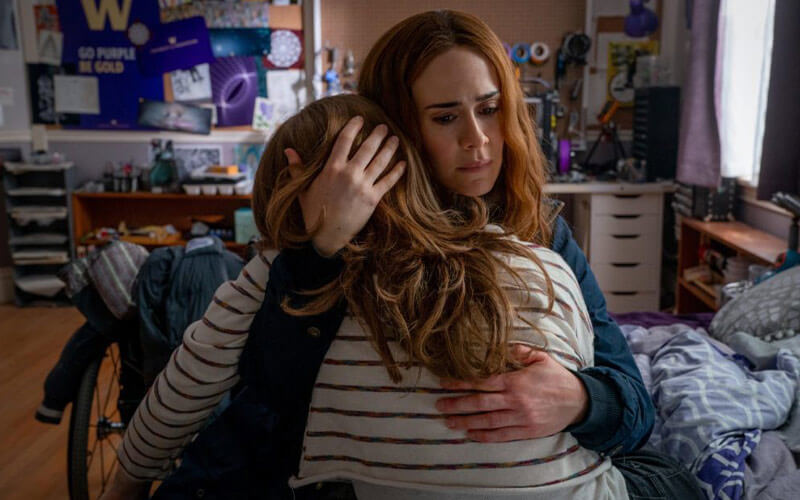 A Look at the Film ‘Run’ (Spoiler Alert).

‘Run’ is a psychological thriller with Sarah Paulson as a mother who has Munchausen’s Syndrome by Proxy.

Munchausen’s Syndrome by Proxy is a psychological disorder whereby a person takes advantage of a vulnerable other, usually a child or an elderly person, and induces illness in them to get a need met in themselves which may be the need for attention or in some cases for financial reward. It is thought to be caused by childhood trauma.

Paulson plays Diane, who is a single parent, living with her daughter Chloe. Diane, of Latin origin, means divine. Chloe, of Greek origin, means ‘little green sprout’ – Diane is the god in their relationship and Chloe is being grown. Their surname is Sherman, from middle English, evolved from shear man, of Old English origin, a man who trimmed wool cloth. This can translate into Chloe being sheared or moulded into the desired object for Diane, or Chloe being clipped, being cut, or something being taken from her.

Chloe is home-schooled, does not appear to have contact with anyone except her mother and is in a wheelchair as her legs are paralysed. She takes medication daily. Her mother grows organic food in the garden.

At first glance the relationship appears to be close and friendly. However, it quickly becomes clear that Diane is extremely controlling, she dictates Chloe’s diet and how much time she spends studying each subject in her schooling. Chloe is waiting for a letter from a college she has applied to and will leave home if accepted and she seems desperate to find out whether she has been accepted.

Chloe then makes a discovery that shows her that her mother has been lying to her and she discovers the depth of the lies her mother has fed her literally and figuratively. She realises that her entire life has been a lie. The pills are symbolic of her swallowing the lies and she stops taking them.

Chloe is paralysed and this is symbolic of her being trapped and unable to run from her mother. Diane has physically crippled her child and also wants to emotionally cripple her, this is a much harder task. This could be symbolic of Diane projecting all her repressed emotional pain onto Chloe and has turned her into a representation of how she feels internally.

Chloe is there as an object (her personal sovereignty is ignored) to serve her mother’s needs. What she wants is unimportant to her mother. Diane possesses her child and overwhelms her. Control is paramount. The need for Diane to fixate on the external is a way to avoid what is happening internally as the pain is such that Diane cannot face it.

The contrast between Diane feeding her daughter organic food from their garden along with the medication which is making her ill is indicative of the external façade a person with MSBP or Cluster B Personality Disorder will portray to the world of appearing caring and loving, while the reality, privately, is very different.

It is revealed that Diane stole Chloe from a hospital to replace her own dead child. This shows her sense of entitlement, a complete disregard for the feelings of others and a selfishness and callousness that is hard to comprehend. These are all markers of a Cluster B Personality Disorder.

As the situation comes to a head and Chloe wants to escape Diane tells her, “Everything I do is for you.” Also, Diane states, “You’ll be my baby, forever” (mothers with NPD will often cite that their favourite time with their children is when they are babies, this is when they are most malleable and easy to control).

Chloe replies with, “You did this for you” and “you need me.” Mothers with MSBP/NPD do need their children and they use them to regulate their inner world which they cannot face. They use them as objects to control, mirror back to them their fantasy of who they are and shame and project all the parts of themselves they do not like onto or to take credit from their child’s achievements. If the child does not play the role they will be rejected and the mother will fill their needs in another way.

The behaviour of the mother is driven by a warped sense of love – an anti-love – as it is the opposite of what love is supposed to be.

Similarities can be drawn between mothers with NPD and mothers with MSBP – they are anti-mothers who view their children as objects to be used to fulfil their needs. Their version of love demands total obedience and acquiescence to their needs and wishes. They terrify their children into becoming what the mother wants. The anti-love possesses others and feels entitled to do whatever it wishes with those it feels it owns. It is suffocating, stifling, controlling, manipulative, dishonest, demanding and crushing. It takes and it does not give.

It twists the child’s understanding of what love is and later in life, if they have not healed, they will find themselves in relationships where they are treated in the same way.